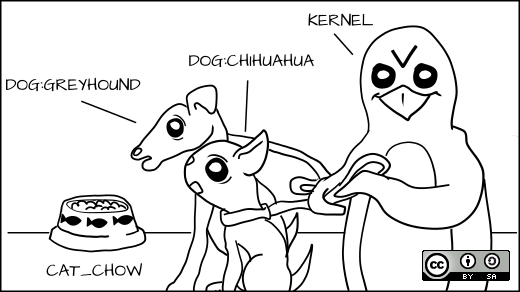 We are celebrating the SELinux 10th year anversary this year. Hard to believe it. SELinux was first introduced in Fedora Core 3 and later in Red Hat Enterprise Linux 4. For those who have never used SELinux, or would like an explanation…

SElinux is a labeling system. Every process has a label. Every file/directory object in the operating system has a label. Even network ports, devices, and potentially hostnames have labels assigned to them. We write rules to control the access of a process label to an a object label like a file. We call this policy. The kernel enforces the rules. Sometimes this enforcement is called Mandatory Access Control (MAC).

The owner of an object does not have discretion over the security attributes of a object. Standard Linux access control, owner/group + permission flags like rwx, is often called Discretionary Access Control (DAC). SELinux has no concept of UID or ownership of files. Everything is controlled by the labels. Meaning an SELinux system can be setup without an all powerful root process.

Note: _SELinux does not let you side step DAC Controls. SELinux is a parallel enforcement model. An application has to be allowed by BOTH SELinux and DAC to do certain activities. This can lead to confusion for administrators because the process gets Permission Denied. Administrators see Permission Denied means something is wrong with DAC, not SELinux labels.

Imagine a system where we define types on objects like cats and dogs. A cat and dog are process types.

*all cartoons by Máirín Duffy 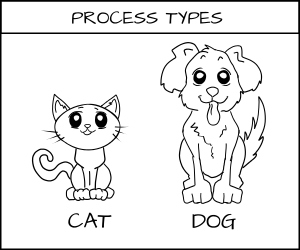 We have a class of objects that they want to interact with which we call food. And I want to add types to the food, cat_food and dog_food. 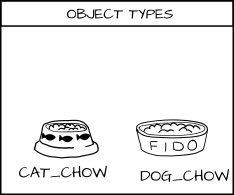 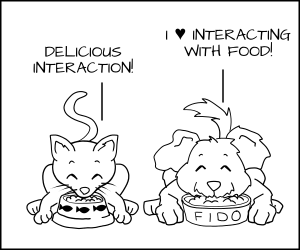 But in an SELinux system everything is denied by default. This means that if the dog process tried to eat the cat_chow, the kernel would prevent it. 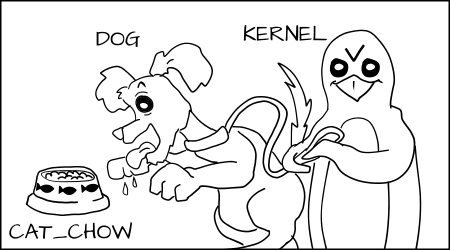 Likewise cats would not be allowed to touch dog food. 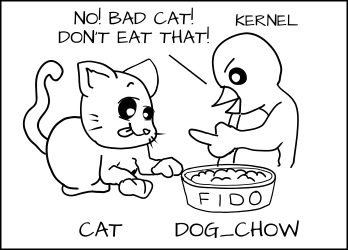 Above, we typed the dog process and cat process, but what happens if you have multiple dogs processes: Fido and Spot. You want to stop Fido from eating Spot’s dog_chow. 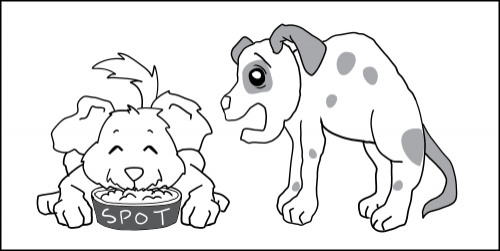 One solution would be to create lots of new types, like Fido_dog and Fido_dog_chow. But, this will quickly become unruly because all dogs have pretty much the same permissions. 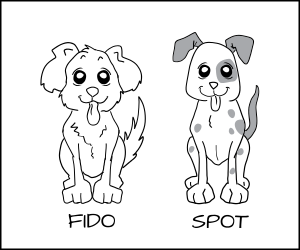 MCS rules say that if the type enforcement rules are OK and the random MCS labels match exactly, then the access is allowed, if not it is denied. 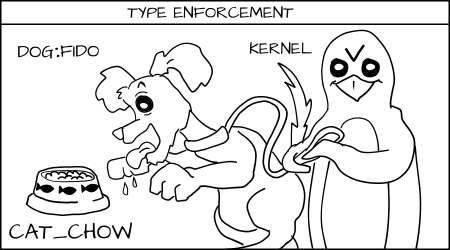 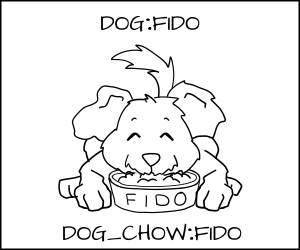 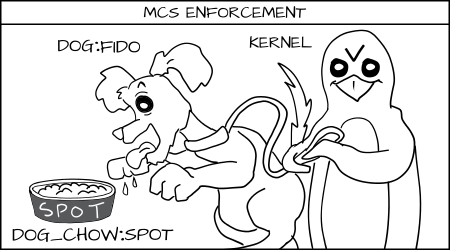 We use similar separation in OpenShift. Each gear (user/app process)runs with the same SELinux type (openshift_t). Policy defines the rules controlling the access of the gear type and a unique MCS label to make sure one gear can not interact with other gears.

Watch this short video on what would happen if an Openshift gear became root.

Another form of SELinux enforcement, used much less frequently, is called Multi Level Security (MLS); it was developed back in the 60s and is used mainly in trusted operating systems like Trusted Solaris.

The main idea is to control processes based on the level of the data they will be using. A secret process can not read top secret data.

MLS is very similar to MCS, except it adds a concept of dominance to enforcement. Where MCS labels have to match exactly, one MLS label can dominate another MLS label and get access.

Instead of talking about different dogs, we now look at different breeds. We might have a Greyhound and a Chihuahua. 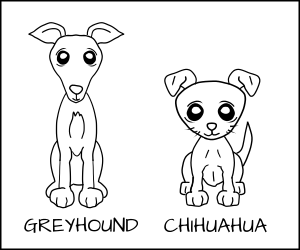 We might want to allow the Greyhound to eat any dog food, but a Chihuahua could choke if it tried to eat Greyhound dog food. 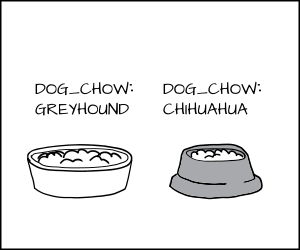 With the MLS policy, we would have the MLS Greyhound label dominate the Chihuahua label. This means dog:Greyhound is allowed to eat _dog_chow:Greyhound _and dog_chow:Chihuahua. 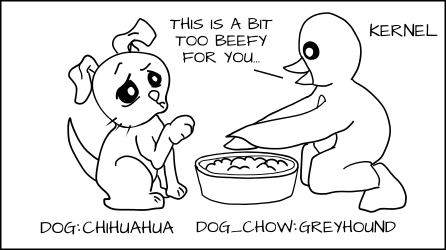 Of course, dog:Greyhound and dog:Chihuahua are still prevented from eating cat_chow:Siamese by type enforcement, even if the MLS type Greyhound dominates Siamese.

We use the MLS in military environments where a user might only be allowed to see secret data, but another user on the same system could read top secret data.

SELinux is a powerful labeling system, controlling access granted to individual processes by the kernel. The primary feature of this is type enforcement where rules define the access allowed to a process is allowed based on the labeled type of the process and the labeled type of the object. Two additional controls have been added to separate processes with the same type from each other called MCS, total separtion from each other, and MLS, allowing for process domination.